Cachirulo in Obelisco Tango Saturday night was almost bursting at the seams.

Grand tango social dancers were in attendance and appeared to be chomping at the bit to get themselves on the dance floor as Carlos Rey played his delightful music selections.   But, wait…the locals were looking somewhat frustrated by the lack of navigation, circulation and floor craft.   Some were clearly not using mirada/cabeceo.   A few regulars were probably thinking twice about getting out there on the slick dance floor with some very enthusiastic participants that didn’t seem to know the ABC’s of Buenos Aires tango social dance floor craft.

In 2005, while dancing tango in Salon Canning, one of the old milongueros told me it was the ‘honour’ of the milonguero to ‘never’ touch anyone on the dance floor.  Once he made me aware of this it was wonderful to have that realized beautifully on the dance floor. We were on this brilliant square wood floor in and amongst every kind of tango dancer and….low and behold…had never touched anyone and were able to circulate with the group in the ronda.

To move as a group and feel phrases of the music and breathe together as a community……incredible! 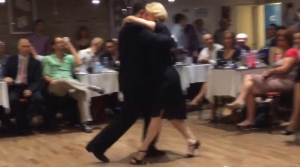 On Saturday evening even with the fear of people bumping into each other and the floor being somewhat slippery, it was great fun.  The celebrations culminated for me with an invitation to dance for my birthday by Hector and Norma of Los Cachirulos Tango.

Magnificent Claudio Strang agreed to dance with me.

Thank you to everyone who sat through the demonstration and honoured us with their presence. 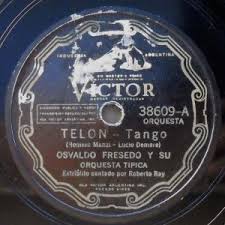 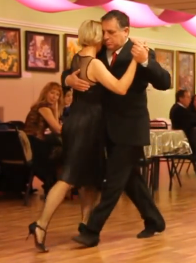 As the music introduction unfolds, within the dreamy embrace of my partner, my eyes close and mind travels to a place where music and movement reigns.

I step, swirl, pivot, turn and glide in a trance like state.

We breathe together and allow our bodies to melt into the music and absorb the vocal and instrumental lines.

Together we unite as collaborative partners in this realm and dance our beloved tango.

Dancing from the heart

Do you ever wonder how musicians create a piece of music like the tango “Margo” and make it so haunting and beautiful?
The mood within this piece simply begs to be danced slowly and with heart.

Each time I listen to the alluring orchestral introduction which quickly runs into the wonderful vocal melody, my mood becomes melancholy, wistful, and somehow this even slows me down.

The introduction prepares one for the story that is about to unfold musically and in the lyrics.

The musicians that created these gems, loved music. They also loved tango. From this base they chose each music note with great care and respect.

The 1940’s must of been a thrilling time for tango musicians.

If we listen very carefully to the music we can almost imagine our friends from so long ago dancing with us.

Welcoming Claudio to Canada this February… 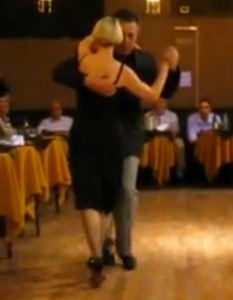 Join us on Wednesday February 19th at WE Tango to welcome Claudio Strang to Toronto and take part in a special class that will focus on dancing milonga.  (How appropriate at a milonga hosted by John Needham!)

A series of classes & workshops will be held throughout February.   Please join Isabella and Claudio and take advantage of this unique opportunity to learn their beloved ‘close embrace’ Tango.”

Claudio and Isabella dance the beautiful close embrace style of Tango that reflects the intimacy of the downtown milongas in Buenos Aires.  Their simplicity, elegance and passion can be seen in this recent demonstration that was filmed in Cachirulo, El Beso as a ‘despedida’ for Isabella.”

I heard you are ….. doing a milonga tour?

This was the question/comment posed to me Saturday night at a Tango milonga/dance in Portland, Oregon recently by an attractive milonguera there.

It really made me laugh.

I didn’t realize the locals (some new friends, others old) knew what I was up to (obviously aided by my hosts).

Upon arriving in Portland just after Christmas my friends asked me what I would like to do while visiting there.

Hmmm… how about a little tour of all the local milongas/practicas?

Being the great people that they are, my friends happily agreed to come along and help me out with the ‘task’.

So, each day for eight consecutive days/nights we eagerly went to a local Tango milonga/practica……..’crawl’ in Portland.

Every day I danced with experienced and less experienced partners….at times ending the evening with absolute exhaustion, which felt wonderful.   Each milonga had some stupendous tango tandas.   Without exception in all events, people took time to chat with me and make me feel happy, special and included.

Events that were sampled:

Each event had a unique flavour and vibe.   Overall the music was captivating with the majority of selections focusing on the melodic Golden Age of Tango from the 40’s.

As a whole, the community gave me a huge tango ’embrace’ and succeeded in, again…helping me have a terrific time.

This entry was posted in Isabella Szymonowicz. 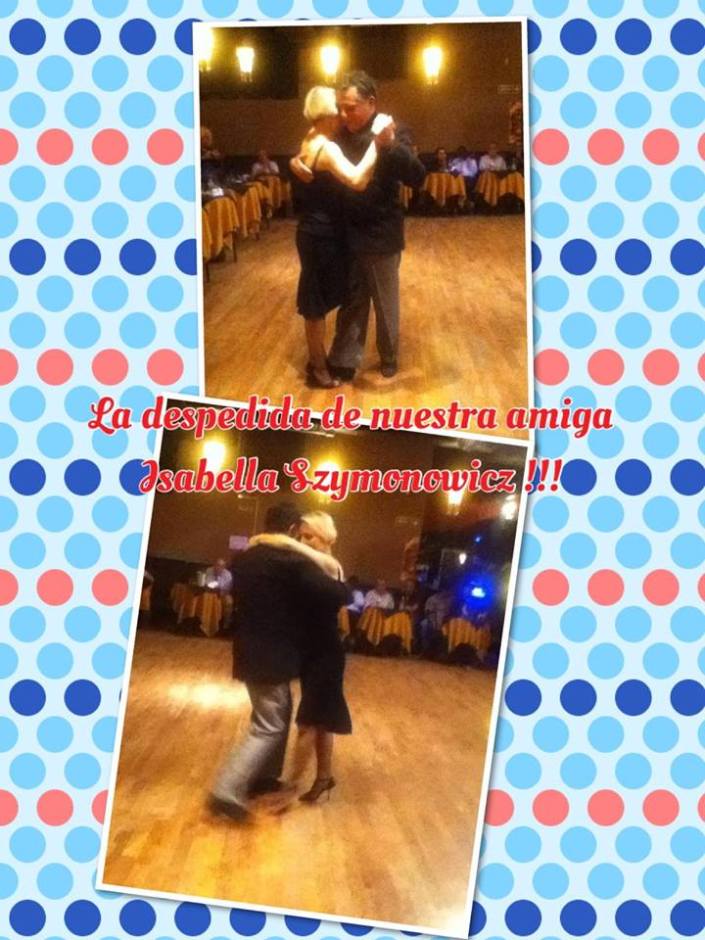 On my last Saturday night in Cachirulo Obelisco, Buenos Aires last September, Hector (the famous, flamboyant organizer) came up to me and invited me to dance a “despedida” dance in Cachirulo El Beso on the following Tuesday and did I have someone in mind I would like to dance a Tango with.

The invitation was accepted, eagerly, and of course I had someone in mind to dance with me.

Who else but Claudio Strang this year?

He accepted….now the only thing left to decide was which Tango would we dance. Well, this is quite a difficult question if you love to dance Tango. Which one? Should the tempo be slow..or fast? Melodic or rhythmic? Which orchestra? Vocal or instrumental? And let’s not forget having both partners agree to the same selection.

Fortunately we had planned to get together anyway and film a few videos so we thought some tango would spring to mind and it would be relatively easy to come up with a selection.  During our filming we decided it would be nice to dance Pocas palabras by Tanturi/Castillo.

Having gotten to El Beso later than usual for me, after dancing one tanda, Hector came up to me and said that after the next tanda we would do the demo. He wanted us to dance earlier than usual because there probably would be a lot of people that wanted to leave early as there was an important football match on.

Claudio and I are introduced, everyone is told it is my ‘despedida’ (good-bye or farewell) and the music comes on.

Well both Claudio and I look at each other with surprise as the first notes are played….we laugh, embrace and begin our fun.

Talk about an improvisation. 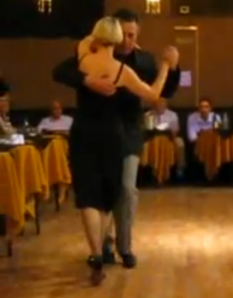 With all the best planning in the world anything can happen in Buenos Aires. As the first notes echoed out we realized that someone misunderstood which song we would dance…instead of dancing Pocas palabras by Tanturi…we heard Siete palabras by Di Sarli, which we had never even danced to before together!

We had a good time and having danced many years in Cachirulo El Beso, it felt great to have to a chance to dance in front of many friends and the incredible wonderful dancers that go there regularly.

Thanks again to Hector and Norma of Cachirulo.

Tango dancing in Albuquerque at the Festival 2013

Thrilling….to be on the dance floor in North America with hundreds of people dancing tango. A floor so immense it never actually looked really crowded. Tons of dancers dancing and trying to stay in some kind of lanes. People moving in completely different styles but respecting the available space and moving in a soft way. This was delightful. The vibe, energy, mood was great. Everyone looked like they were truly enjoying themselves. Lovely!!

Here is a clip of the ronda featuring the Festival Instructors….showing a great deal of enthusiasm and fun in this Canaro milonga.

I also had the great pleasure of working with Paul Akmajian as guest teachers at the festival… and enjoyed our classes, as always, very much. 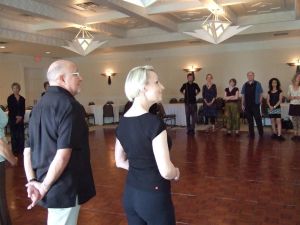 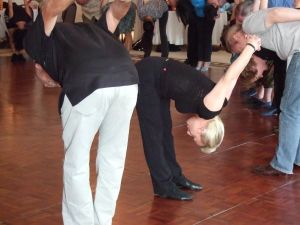 Pam and John … founders of We Tango … are taking some time off and luckily a few friends of mine gently suggested that I should offer to help them out. To my surprise the ever gracious couple have taken me up on my offer and here I go again … back at Swansea Town Hall.

Please join me on Wednesday nights, from 8p.m. to 10:45p.m. to share some beautiful music, friends and “charla”.

“Papas Caliente” by Donato seemed the perfect milonga to dance last week in Buenos Aires since there seemed to be no milongas available with titles like….’Cool breezes’ or ‘Milonga de Patagonia’…. as it happened to be the warmest day ever on record for September.

Still winter but at 29 degrees Celsius who would believe that?

The dancing became much more ‘quiet and still’ reminiscent of how the older milongueros do it… with great reserve and many years of practise of pacing themselves for the long hours spent at the milongas. (Recently a new place to dance at in Buenos Aires opened up with the hours from 17:00 to 03:00! I wonder if there are participants that stay for the full ten hours? And let’s not even talk about the complexities of DJ’ing such an event on a regular basis.)

The weather, mood, provided a lovely chance to dance simply, elegantly and within the embrace of a beautiful dancer…Claudio Strang.